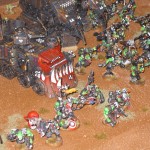 Recently, I attended a local 40K tournament; a three-round, 1850, one-day event. The store hosting the event has a reputation for attracting some of the more competitive players in the area, typically bringing hard-hitting lists. Being a more casual gamer, I was well prepared to get my ass handed to me. My goal at these smaller events is to try and get in one or two fun games (usually after being knocked out of the front running), make a new friend, and hopefully win best painted. 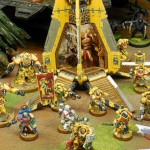 In the past, I’ve seen  many competitive players show up with the latest, freshly assembled, not-even-primed meta that is guaranteed to pulverize their opponent (and their opponent’s love for the game). Now, I expect casual game etiquette and sportsmanship sensibilities to warm the bench during these tournaments. However, it irks me that so many competitive players often let painting fall by the wayside. Why do so many gamers forget (or simply ignore) there is more to the hobby than winning games? What about sportsmanship? What about fluff and themed army composition? What about painting?

Granted, the Michelangelos of Warhammer 40K are few and far between, but I’m not asking for the Sistine Chapel. Simply the three-color minimum and basing. It may sound crazy, but I have more fun when my opponent’s army is painted, and I know I’m not alone. It’s exciting to see a squad of painted soldiers take cover in a ruined building. Less so when it’s a handful of gray plastic eyesores.

That being said, I was pleasantly surprised when I arrived at the tournament to find every single player had brought a fully painted army. Granted, there weren’t any Golden Daemon winners, but it was a huge improvement compared to the legions of gray plastic I’ve seen at previous events. And, as a result, a much more fun and engaging experience . So Kudos to you competitive local 40K players. I tip my brush to you.

The rest of the event played out as anticipated. I think I ranked second to last (who really keeps track when you’re that far behind) and I made two new friends (one of whom I have a game scheduled with next week). Overall, it was a well-run event with great participation, made even better by playing against opponents with painted miniatures. I hope to see this trend continue.

Want to see what Shae has to say about it? Check out his blog, Shae’s Way.