Ahoy there, mates! Get small and baton down those hatches because we are about to scratch the surface on one of my absolute favorite videogame genres: the u-boat simulator!

Patience is the Key 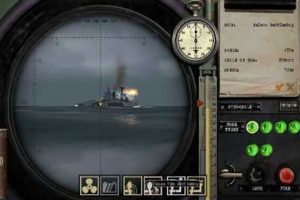 In the world of subsims, you’re the captain of a u-boat (another word for a German submarine) during WW2. Your job is to order your men around the Atlantic Ocean until you come across some enemy ships to sink. Your mission is to sink as many as you can and then leave the area fast, preferably undetected, and eventually return back to base in one piece. It’s fun! But also hard. When you get down to it, it’s a game of patience. In the past, I have legitimately spent 10 minutes stalking a ship, edging ever closer to it underneath the surface, getting into position and firing a torpedo at it, watching the torpedo glide swiftly to the hull of the enemy ship, only to watch the torpedo harmlessly (and comically) bounce off of the side. The torpedo was a dud. That’s 10 minutes wasted and I have to beat a hasty retreat before enemy destroyers are alerted. Doesn’t that sound fun!? Anyone!? *crickets* Well it is, so you can shove it.

I got interested in these games many years ago; mostly because of the German film Das Boot which I highly recommend! The film captures a bleak view of sailors on a cramped u-boat. It shows some of the boredom, stress and utter terror that submariners must’ve experienced. The film is all around great and was the introduction to a longtime passion of mine. The Silent Hunter games are a great companion to the film. They also capture the monotony, anticipation and some of the excitement of German u-boaters.

The first subsim I ever played was Silent Hunter III. This game is just short of a masterpiece! It’s a pretty legit sim. You can poke and twist and pull just about every button and lever in the control room. They all affect the sub somehow. You can play the game as complicated or as easy as you would like. You can manually manipulate the buttons and levers to get the vessel to do what you want it to do, or you can just order one of your men to do it and it’ll get done. The game is that deep. 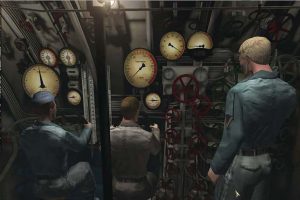 Also, as I stated above, the game involves a lot of patience. You begin by navigating your sub into open waters. As captain, you can then go up on the bridge and use your binoculars to scan the horizon until you or one of your men spots a ship. Once spotted, you can decide to submerge and get as close to the ship as possible to give your torpedo the best chance of hitting. This is way easier said than done. The game can be as simple or as complex as you would like. For example, on its most realistic setting, when firing a torpedo, you have to manually do the math in order to get the torpedo to hit its target. However, on its easier setting you can just point the cross hairs of the periscope on the ship and order your men to ‘fire,’ but this still doesn’t guarantee a hit. There are a lot of different variables that factor in to your success. The game is complicated, but fun and if you have any kind of interest in submarine warfare, you will love it.

A lot of subsims are complicated, but luckily there is a small but robust community for these games. There’s a website called subsim.com and its dedicated to all things sub simulator. It references just about any subsim game released and you will find mods and advice as far as the eye can see. It’s a real positive community. I’ve asked many questions in the forums and have always gotten real informative and polite responses. They also have great graphics and game play mods that help you get the most out of your game. Also, they are currently developing their own multiplayer subsimulator which is really exciting. Part of the fun of playing this game is being involved in this great community!

So I know I’m kinda all over the place this month, there’s a lot to unpack with these games and I’ve only just scratched the surface. If you’re into any kind of historical ww2 game or deep sims, you will enjoy the Silent Hunter series. They are robust games with a great and inviting community. Check ‘em out!