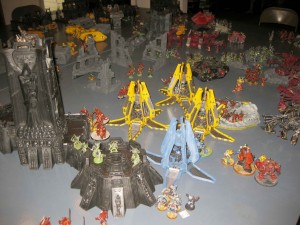 Wherever you land in 40K spectrum, whether you’re a casual narrative-based gamer or a dedicated tournament player, everyone gets excited at the idea of playing in a game of Warhammer 40K Apocalypse. For many, this event only happens about once a year, but the enthusiasm wrought from seeing your entire collection of models slugging it out in an epic battle is enough to take any gamer from six to midnight. So why, more often than not, are Apocalypse games usually a let down.

And that’s not to say a game of Apocalypse itself isn’t filled with awesome, one-of-a-kind units, engaging narratives, or staggering carnage. However, all too often the sun sets before the battle is truly resolved, leaving us with an anticlimactic feeling of “huh.” To get the most out of what Apocalypse has to offer, it’s important to plan in advance and remember the three Ps of Apoc. 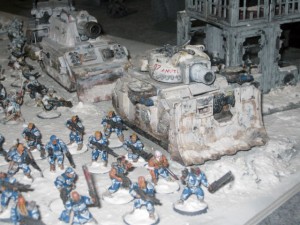 You can’t have any game without players, a fairly obvious statement in and of itself. If you don’t have a specific group of friends in mind, posting on forums or at local game stores will usually garner a response. But with players, the problem usually isn’t finding enough, it’s having too many. More players equal more fun and a greater chance for epic dynamics on the battlefield. However, with each player comes baggage. Not necessarily a collection of mental and social drama (though sometimes that applies too). More players mean more collaboration, on everything from army lists to deployment to target selection to where to go for lunch. While collaboration is good, and should be encouraged, it will undoubtedly slow down the game. Make sure you select a number of players appropriate to the intended size of the game. Keep in mind that each player will most likely want to bring between 3,000-5,000 points worth of miniatures. 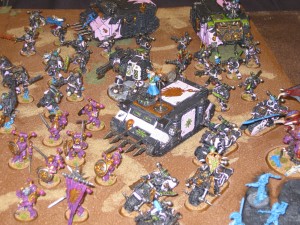 Just as important as having people to play with, you need a place to play. If you or one of the other players has their own table and terrain, then this part should be easy. It’s just a matter of putting something on the calendar. However, if you aren’t fortunate enough to have access to a private gaming dungeon (gamegeon), you’ll need to make alternate arrangements.

Most local game stores are flexible and willing to accommodate almost any size game, but it’s important to take the store’s needs into consideration. Generally, it’s not a good idea to just show up one Saturday morning and start pushing tables together. Talk to the storeowner or manager ahead of time. Make sure there are no other events scheduled that day and, if there are, confirm that they’re okay with having a game of Apocalypse running along side it. If you can, reserve the tables and terrain you need in advance. Again, most game stores are flexible and will be more accommodating if you give them a heads up.

Also, if you do end up playing your Apocalypse game in a local store, while you’re there be courteous to other gamers and customers. Apocalypse games don’t happen often and you’re game is going to attract a lot of attention. Remember, your local store is doing you a favor by letting you play there. They don’t owe you anything. So be courteous to not only the staff, but to their customers as well. Answer questions if you can, and be mindful of foul gestures and language. A little courtesy will go a long way to ensuring you can continue to use your local store’s game space as an Apocalypse resource. 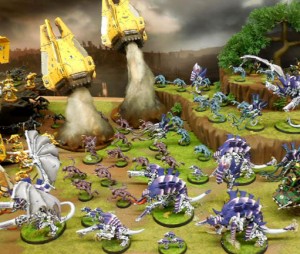 The last and most often overlooked is pace. It’s easy to lose sight of the big picture if you’re too focused on battle strategy and Apocalypse Formations. Most gamers get carried away with the over-arching idea and fail to see just how long playing a game of Apocalypse will take, especially if there are several players on each side. The following is a fair breakdown of what you can expect:

A five-turn game can easily take more than 12 hours to finish. And while it might be tempting to cut out breaks or get everyone to agree to eat while playing, you’ll want opportunities to regroup with you teammates and clear your mind of the 40K battle fog.

While the idea of playing in a game of Apocalypse is exciting and, if executed right, incredibly rewarding, it’s not a hassle-free endeavor. Organization is fundamental to having a good time. Being mindful of a few basic planning tips can go a long way to ensuring your next game of Apocalypse is epic instead of unremarkable.