A Look at The Simpsons Arcade Game

Hello, internet! I’m excited about this new post because I’m about to combine two of my absolute favorite things: video games and The Simpsons. Now, there are a lot of Simpsons-related games out there, and most of them are crap, but I’m going to focus on one of the good ones, the best one actually. And that one is The Simpsons Arcade Game! If you thought I was going to say The Simpsons Hit and Run, how does it feel to be wrong?

We Put the *Spring* in Springfield 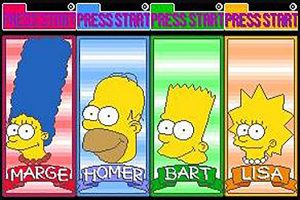 The Simpsons Arcade Game is a strange beast; it’s rare that a licensed game is this good. I know they exist, but they are somewhat uncommon, especially for the time period. It’s also funny that it shares a few traits of some of the licensed trash that was being produced, but it managed to rise above. For instance, there are a few things that come off as a bit generic. You can tell that the creators of the show had little input into the creation of the story. The story itself involves Maggie Simpson being kidnapped, because she inadvertently took a diamond that Mr. Smithers had just got done stealing, and the family’s quest to get her back. As a seasoned Simpson’s fan, none of what I just wrote makes any sense. It’s literally just a story for the sake of having a story…and you know what? It works. It’s not good at all, but it gets the job done.

Not Quite Double Dragon 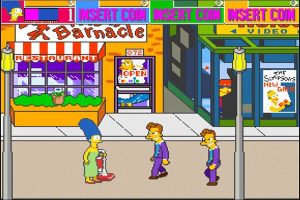 The real bread and butter of this game (as with many arcade games) is the game play. The game is a side-scrolling beat-em-up adventure. You can choose from any of the other Simpsons, each with their own weapons and abilities. Homer kicks and punches, Lisa can attack with a jump rope, Bart uses his skateboard, and Marge wields a vacuum cleaner, which is both sad and hilarious. There are also items that can be picked up and used as weapons, or consumed for a health boost. The levels and enemies are suitably varied and it’s a lot of fun to see where the game takes you next. The game is also not without The Simpsons style of humor.

Like The Simpsons themselves, arcades were a mainstay of the early 1990’s. Arcades seem to be having a little bit of a comeback and any arcade worth its salt will still have one of these machines hummin’ in the back. I have fond memories of playing this game with my brother, sister and a friend at an old Godfather’s Pizza a long time ago. They only had one arcade machine and they made a great decision by making it this one. Konami did release this game on Xbox Live back in 2012. I own that version and have played it through a few times, but it definitely leaves something to be desired. Without the risk of losing your hard earned quarters, it’s just not as fun. I found the same issue with the X-Men Arcade Game. So the only true way to play this game is on an actual machine in a dingy arcade and ideally with friends.

The Simpsons have a large and varied video game library. I intend on doing an overview of the older games released between 1990 and 2000, but I wanted to focus exclusively on this one first. This game was a big part of my childhood and even to this day, when I walk into an arcade, this is the first game I look for. The Simpsons Arcade Game belongs side by side with the other classics of the arcade era, like Mortal Kombat, Teenage Mutant Ninja Turtles, and Double Dragon!