Hello Internet! Well, it’s December and you know what that means? It’s time for another installment of Marshall’s Cavalcade of Holiday Horror! This time we will be talking about one of the greatest games ever made:  Zombies Ate My Neighbors for the Super Nintendo (Also Sega Genesis, but who cares?). 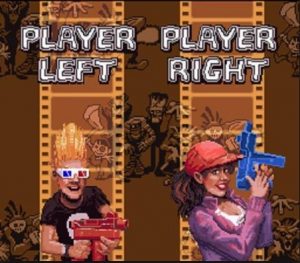 Zombies Ate My Neighbors is a love letter to the horror movie genre. It honors the B-movie schlock from the 50’s on up. You play as one of two totally radical 90’s kids (or both, because like any great game it has local co-op) as they navigate a series of horror themed levels, trying to literally save as many neighbors as possible. They’re armed with an array of the most creative weapons of any video game. You start out with the seemingly underpowered, but super useful, squirt gun, and along the way you pick up other more crazy weapons like: a bazooka, cans of pop (they act like grenades and are great at defeating killer dolls), silverware (great at killing werewolves), fire extinguisher, a Martian bubble gun, and many others!

You navigate the labyrinthine of levels to rescue your oblivious neighbors and destroy as many enemies as possible, then make your way to the next awesome, horror-themed level.

Speaking of levels, each one is based off of a famous horror movie setting. You start out in the neighborhood, where you fight hordes and hordes of zombies and then move on to a shopping mall, a killer-doll factory, a hedge maze, a vampire castle, an Egyptian tomb, an underground mine, a high school, and lots more. Each level is well thought out and fun as hell to explore. They’re packed with Easter eggs that many horror movie buffs will recognize and pick up on. The music is bitchin too; setting the tone perfectly throughout. 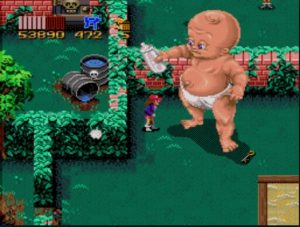 The enemies are as well done as the levels and each one is a callback to some classic horror movie. We got zombies (obviously), killer dolls, creatures from black lagoons, blobs, Martians, chainsaw-wielding mad men, replicants (a la Invasion o f the Body Snatchers), a giant fucking baby, and everything in between. The enemies are a serious treat and it’s so much fun to experiment with different weapons to find the perfect way to defeat them. Each enemy has an ideal weapon that works great against them.

This is a great game. If you haven’t played it, you truly need to and are doing a disservice to yourself if you haven’t. I would even say that it’s worth it to buy a second hand SNES and a copy of this game just to play it. If you are a fan of the B-movies of yore, you owe it to yourself, seriously. This game also has tons of replay value and it isn’t a breeze. It actually has a perfect learning curve. The early levels are a great intro and do a good job of easing you in, but they gradually ramp up and the latter levels are downright hard. This is also a game that’s best enjoyed with a friend.

So, like I said, find this game and pick it up, it’s worth it. I think it might even be available on the virtual console (but unfortunately not on the SNES classic). It’s time and money well spent and like all good things, its best enjoyed with a friend.