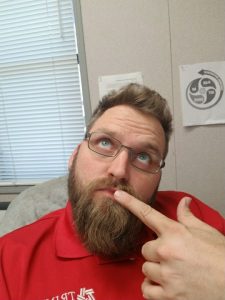 And now to set the scene:

It is a beautiful present day Texas. Birds chirp from the limbs of cacti, the faint baby-like rattle of a snake can be heard off in the distance drumming upon ears of the grimy dust covered public. From a distance a stranger can hear the jingle of piano in a saloon. He wipes his face and the stubble of his beard brushes like sandpaper on his hand. His hand falls to his side resting on the Ziggy pattern of his poncho just barely brushing against the handle of his six shooter underneath. The stranger begins his route to the saloon kicking up dust in the dry heat and a single tumbleweed rolls past his path, almost fleeing from him.

The sound of the piano grows steadily closer with the tones of grumbling guests talking with a tinge of alcohol induce speak. The stranger places his snake skin boot on the first wooden plank of the saloon…then the next. He stops at the top and looks around the town and watch as its citizens seem to cockroach from his gaze, fleeing the streets and sealing their shutters. He turns back to saloon and pushes past the double swing doors.

The jingle of the music ceases, the voices of the public are gone and all that remains are the sounds of wood swinging on hinges behind him in a metronomic pattern. The stranger walks forward slowly, each boot striking the wood plank floor with a commanding thud. He reaches the bar. The bartender’s bristled mustache twitches in fear as a bead of sweat travels down his forehead.

“Now I don’t want no trouble mister,” The tender manages to squeak out in a southern drawl.

“Oh there ain’t gonna be no trouble such long as you give me what I want,” the Stanger growls. “Lets just say I’ve been travelin’ a long, long time. One might say I’d be hungry. Famished would say the others.”

The crowd begins to ruffle slightly as patrons slowly trust the moment to create a murmuring voice without the consequence of death. The bartender releases a slight sigh of relief.

“Well our menu isn’t quite the deepest cuisine but he have our fair share of…..” He is cut off.

“I am looking for something a little more unique. A little bit more palatable to satiate my hunger. Well to be frankly honest the only thing that I think can quench that right now is a little good ol’ fashion homestyle made Flaccaroni and Cheese.”

A hush reenters the saloon blanketing the crowd with silence yet again.

With a speed of snake catching a prairie dog the strangers pistol meets the forehead of the saloon owner, hammer drawn. If the threat weren’t so great the bartender might enjoy the feeling of the cold steel against his warm skin.

“Now, I am going to ask you one more time hussy before I give you another hole in your head to breathe out of.”

“That’s enough of that now!” A man steps out from behind a pillar. He had been concealed from the view of the stranger. The man, wearing a black velvet hat, black vest, dark purple shirt with yellow trim and black pants to match, relaxes his hand on his own six shooter with a calming essence, several dice are clutched in his other.

“Well I’ll be. If it ain’t the Flaccaroni and Cheese himse…”

“I prefer Allan. You know less syllables a such.”

The stranger with lightening quickness re-centers his shooter on Allan who makes no attempt to go for his own.

“What are you doin’ here stranger?” Allan askes though he seems to know how this situation is already going to play out.

“Oh silly me, I didn’t tell you did I. Well I’m here for your title. Mr. Fantasy Champion himself…well that belongs to me.”

“Ah you high class floozy, this is the Mild Mild West and around these parts we take what we want, see, and I so happen to be the wantiest takiest person I know. So I’m just going to need that title off your hands or my girl Betsy here might just have something to say about it.” He slightly waves his shooter.

Allan after a moment of contemplation responds, “Well, I will say that is a mighty fine proposal but unfortunately its Tuesday.”

“What the hell does that mean?”

“Well you see, round here the people see Tuesday as my ‘don’t give up my title day’. It’s almost like a tradition. If it were tomorrow then yeah I could see that happen, but, and I’m now time scientist, its not tomorrow, right Bob?”

Allan looks over to an unsuspecting patron who displays the look of a fellow without the proper stay in the education system.

“Ya See its Tuesday. And such being Tuesday and all, well I’m gonna have to ask you to go ahead and move along your way.”

“Oh that ain’t gonna happen see. You just signed your death warrant son. I’ll give you one last chance before my pistol starts spittin’.”

Slight pause as Allan thinks and starts to become serious.

As if a glitch in time occurred, it was unable to be determined if the movement of the gun draw, the sound of bang, or the falling of the stranger came first.

Smoke emanates from the barrel almost dancing in it’s success as Allan brings it to his mouth and blows the murder into the ether. Then almost too calmly he says…

“Son, in order to be best, you gotta beat best.”