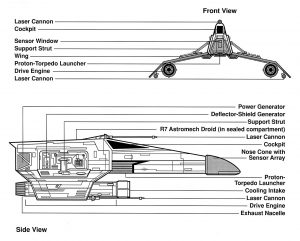 Billed as the superiority fighter of the Rebel Alliance after the fall of the Empire, hopes were initially high for the E-wing. However, the complexity of the design lead to some early system failures during the rigors of combat. The laser cannon power cells were prone to catastrophic overheating, which, given the close proximity to the engines, could lead to crippling damage to weapons and flight capability.

Even after initial design flaws were addressed, the pure combat capability that the E-wing offered was often too much for inexperienced pilots; and with the extreme price tag associated with such an advanced fighter, losses were common and costly. It became clear over time that this wasn’t the ship to press the advantage of the Alliance’s recent success—it was simply too cost inefficient for widespread use, though absolutely deadly in the hands of an ace pilot. Also, the new T-70 X-wing was looming on the horizon, and hopes were high this new fighter would prove to be the mainstay ship, following in the X-wing’s reliable and efficient design lineage.

It seemed the E-wing’s time was at an end. But, ever the resourceful group, Resistance engineers were determined to put the E-wings to good use. Back to the drawing board they went to streamline the design and address exposed flaws.

First, there were the weapon systems. Extensive combat testing showed the dorsal cannon to be a persistent problem. Originally intended to provide the most accurate dumb firing in case of a targeting system failure, pilots found it obscured too much of their vision and the light from high-powered laser blasts affected pilots night vision adversely. After moving the cannon to the chin, results improved noticeably.

Lastly, the experimental astromech compartment created more problems than it solved. While the enclosed compartment protected the expensive R7 astromech, they found it restrictive for in-flight repairs. One of the keys to the X-wing’s legacy was the ability of the astromech to keep the ship in the air, even after sustaining heavy damage. However, by moving the dorsal cannon to the underside, they had space to relocate the astromech socket forward and allow it access to external systems.

Putting Innovation to Use

Having cleaned up the design, it was now time to figure out how best to utilize the redesigned ship. To avoid the logistical nightmare of trying to keep whole squadrons of E-wings in flight, they decided it was best used in hit-and-run missions. Engagements where the advanced weaponry and targeting systems could be leveraged to devastating effect, then they could escape before a proper response could be mounted—thus preserving the expensive fighter.

With a more efficient design, the engineers realized they had some flexibility to specialize the E-wing’s battlefield role. By moving the astromech compartment forward, space was available at the back of the fuselage. Engine techs installed a compact thruster based on the K-wing’s SLAM engines. This engine upgrade offered attack runs on pace with A-wings, and lightning-quick escapes with a well-timed boost.

Also, by relocating the engine pods, more space was available on the underside of the wings and engineering installed modular hard points where the engines used to be mounted. This proved to be a brilliant move, allowing ace pilots to customize their fighters to take advantage of their individual talents. Corran Horn embraced the doctrine of overwhelming firepower and added a secondary pair of blasters to his ship. This allowed him to deliver truly blistering volleys of lasers, but the additional strain on the power cells caused frequent overheating. Horn was fine with this, figuring that offense is the best defense.

Etahn A’baht, ever the tactician, preferred instead to view his E-wing as a mobile command center. By mounting advanced fire-linked target designators, his wing mates could punish key targets with highly accurate firepower and knock out resilient targets with astonishing efficiency.

While the E-wing fell woefully short of its original expectations, the ingenuity and resourcefulness of the Rebel Alliance’s engineering corps breathed new life into the design. The ship could finally take its place as the most powerful superiority fighter in the galaxy. 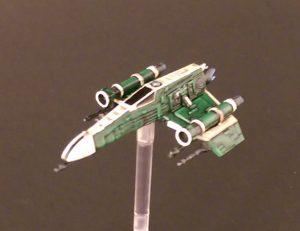