Nostalgia. Some people think of it as a dirty word; the rose-colored glasses we put on to justify our sometimes good and sometimes questionable taste. I’ve been thinking about this topic ever since I was on the Inside the Gamer podcast (which you should totally check out). On the podcast, I wondered what had happened to all of the arcade sports games, because I thought they were so much fun and I preferred them to modern-day sports games. Shae noted that nostalgia was probably why I felt that way. It was a valid statement that made me think about just how much of my opinion on videogames are shaped from nostalgic memories. 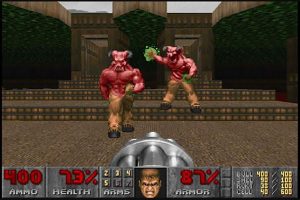 I thought about other games have a strong nostalgic attachment. Take Doom for instance (the original, kids). Doom is one of my all time favorite games. It’s a game that I’ve been playing since ’94 and I’ll throw it in once every two years or so to play all the way through. Why do I love this game? I’m someone who loves to be immersed in a game’s story. I love a great plot and dynamic characters. I love a fleshed out world. Doom doesn’t have any of these things. On a basic level, it’s fun to plow through the maps and shoot things. First-person shooters (FPS) will probably never go out of fashion, but other FPS games have done it better and continue to top themselves over and over again. Aside from being a landmark and grandfather of the genre, Doom isn’t all that special. So it begs the question: Why do I love this game? The simple answer is nostalgia. I was 6 at the time I first played it and I have great memories of early morning Doom sessions with my brother all through adolescence. Waking up early on a Saturday and booting up Windows 95 to send demons back to hell was a favorite past time. One I hope I never forget. 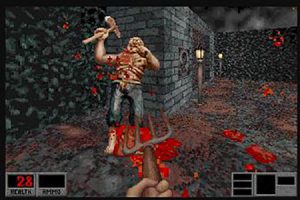 Sometimes I wonder if I were to play Doom for the first time today, would I still like it. I definitely think I would, but I wouldn’t love it. I think this is because I recently discovered an old FPS game that I never knew existed, simply called Blood. Blood is an awesome pseudo-horror game that is self aware and pays homage to tons of different horror and action movie sources. However, as much as I enjoyed Blood, I couldn’t quite get into it the way I could with Doom. Blood objectively has better graphics, story, maps, and many other things, but it just isn’t as fun. I don’t have awesome memories of having the shit scared out of me like when a Cyber Demon popped out of the wall and started to give chase. I don’t have those memories with my bother. I never played Blood with friends. We didn’t talk about it on the playground at school. It wasn’t one of the first video games I’ve ever played.

Nostalgia, without a doubt, shapes my opinion on gaming. I’m kind of a dude stuck in time. I really enjoy modern-day games, but I will always have a soft spot for just about any video game released between 1991 and 2005. That was my golden age. I even prefer the old Resident Evil games over the new ones, because I think the shitty graphics and clunky controls added to the atmosphere.

I’ve met people who have an affinity for the classics and on the other hand people who exclusively prefer current-generation games. There’s nothing wrong with either. We’re all just trying to experience and share our passion for video games. How does nostalgia shape your opinion on games? Do you have a golden age, or are you always looking for the bigger and better that the future has to offer?