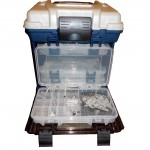 Whether you mountain bike, fish, golf, or play tabletop miniature war games, you invest a significant amount of time and money into your hobby. With many hobbies, once you’ve purchased your snowboarding gear, running attire, or video game system you’re good to go. But with tabletop miniature war games there is an investment beyond money– there is the time associated with assembling and painting your miniatures. Which raises the question, for a hobby that requires such a great investment in time and money, why then do we see gamers haphazardly carrying their miniatures in a plastic tub or cardboard box?

I’ve seen players show up for a game and proceed to dump their models from a box onto the table. Once, at a tournament, I played an opponent who, prior to setting up his army, retrieved several Ziploc bags stuffed with miniatures from the pockets of his cargo shorts. That’s right, he carried his army in the pockets of his cargo shorts. So why, after investing significant amounts of money and countless hours building and painting miniatures, do some gamers continue to transport their models so recklessly? Do carrying cases really cost too much, or are some gamers just being lazy? 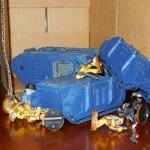 Whether you’re the Michelangelo of Sigmar’s Empire or doing color-by-number in the grim dark future of the 41st millennium, how you transport your miniatures lets other gamers know what to expect from you. If you show up to a game with your models in a box and dump them onto the table during set up, then I assume you’re 15 and saving for your first car, because that’s what you look like.

Any gamer who’s been involved in the hobby for awhile will know right off the bat that you don’t take yourself seriously and you’re not going to take the game seriously. Granted, it’s always important to remember that it’s only a game, and when you parse it down we’re all a bunch of grown men still playing with toy soldiers. But you can take it seriously and still have fun. Treating your miniatures like your childhood Lego collection makes you look like an amateur.

What Money Can Buy

Now, if you want to get a decent carrying case you’re going to pay for it. There are some great options out there—from Game Workshop hard cases ($50.00 to $124.00) to Battle Foam P.A.C.K. carrying cases ($47.99 to $299.99)—but at those prices you could be on your way to purchasing a second army for what it might cost to transport your existing one. And while many gamers, including myself, will tell you that these expensive carrying cases are worth the investment, not every gamer has that kind of money to spend.

So what if you don’t have an extra $50 to $300 lying around? Fortunately, there are a few cost-effective alternatives. A happy medium between your wife’s (or mom’s) Tupperware and a name-brand hard case would be a gun case or tackle box. Either of which can be found at your local sporting-goods store, and can run you $15 to $100 depending on what you’re looking for. 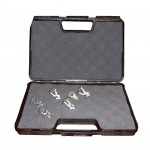 With a gun case foam is included, so all you need to do is take a hobby knife and cut out slots for your models. Of course when choosing to go with a gun case, think twice before purchasing a rifle case. They’ll do the job, but people could get the wrong idea if you look like an urban sniper. Pistol cases look less conspicuous. 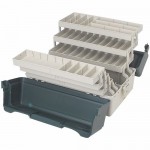 Tackle boxes are typically cheaper, easy to carry, simple to store, and will offer good protection from outside elements. However, the lack of cushion means there’s a decent chance your models will rattle around during transit. For games with pre-painted, one-piece miniatures like X-Wing or Hero-Clix, it’s not a big deal. But for many other miniature games, where models have to be assembled and painted, pieces might get chipped or broken. Of course a little bit of foam or bubble wrap could easily solve this, giving you a cheap and reliable alternative.

If you really have no funds, try converting an empty egg carton into a viable solution. It sounds silly, but I’ve seen people do it. It’s not as simple for transporting or storing models, but it will do the job and cost practically nothing. Add some extra cushion for more protection.

Lastly, if it’s just not worth the time or money to invest in any other option, and you absolutely have to use a cardboard box, then a little bubble wrap can go a long way. By cushioning the bottom of the box, and using additional sheets to create layers within, you’ll be able to benefit from added protection and not look like a complete jackass when you show up for a game. 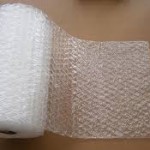 Tabletop miniature war gaming is an expensive hobby, and the effort required to get your models to and from games only adds to the cost. But how you treat your models tells other gamers what kind of player you are, and the type of game they can expect. Gamers talk. A lot. Whether it’s in idle conversation at a local store or in online forums; you don’t want to be the guy they’re talking about. Make a good impression. If you don’t respect your own toys, no one is going to let you play with theirs.